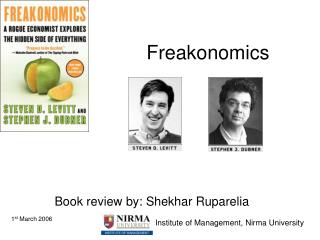 Freakonomics - . “incentives are the cornerstone of modern life.” “the conventional wisdom is often wrong.”

FREAKONOMICS - . melonomics. the food and drug administration warned consumers on thursday [sept. 15] not to eat

Freakonomics - . understanding the hidden side of everything. overview. themes and fundamental ideas. positive vs.

From Freakonomics to Financial Crisis: - . what can chicago economists tell us, and what they can’t. ming-jen lin,