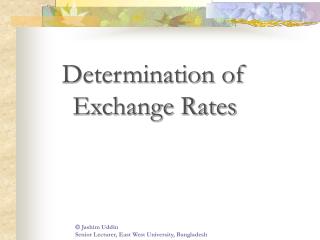 Parity Models and Foreign Exchange Rates - . assessing the “correctness” of the current spot rate and estimating

A Game of Exchange Rate Determination to illustrate the concept of PPP - . emre ozsoz , phd fashion institute of

Ch 13 – Exchange Rate Determination - . if i could find a way to get saddam hussein out of there, even putting a