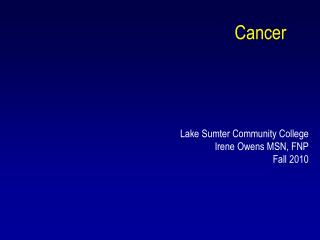 Cancer - . difficult to define. classic definition: tissue overgrowth which is independent of the laws governing the

Cancer - . what is cancer??. cancer is a word used to describe many diseases, all of which are characterized by the

Cancer - . cancer named by hippocrates – crab cancer is not just one disease but rather a group of diseases. all forms

Cancer - . lauren oshry january 12, 2006. normal cells. what are the essential parts of a normal cell? what parts of the

Cancer - There are several risk factors which can cause cancer, such as use of tobacco, alcohol, type of food intake,

Cancer - Is the general term for malignant tumors, which is a group of diseases involving abnormal cell growth with the

Cancer - . cell division gone wild!. cells division is …. the multiplying of cells through mitosis. why do we need

Cancer - . what is cancer?. cancer is a growth disorder of cells begins when apparently normal cells grow

Cancer - . how can you reduce your risk?. cancer. your body cell’s are constantly growing and dividing sometimes they