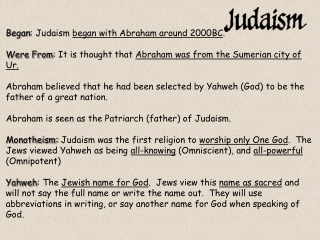 Began : Judaism began with Abraham around 2000BC . Were From : It is thought that Abraham was from the Sumerian city of Ur. Abraham believed that he had been selected by Yahweh (God) to be the father of a great nation. Abraham is seen as the Patriarch (father) of Judaism. Judaism - . the covenant with god. abraham. the religion of judaism has many of its roots in the civilizations of sumer,

The Hebrews and Judaism - . review. what event occurred before abraham left mesopotamia. god spoke to abraham. to escape

Judaism - . jessica thomas. what is judaism?. judaism &amp; jewish people. which person is not a jew?. what is

When do you think globalization began? - . think of an event from history that may have signified when it began? .

Judaism - . the origins, and beliefs. judaism began about 3800 years ago. its started with one mans vision of a single

The Hebrews and Judaism - . the hebrews. a shepherd named abraham was named by god to be the father of the hebrew people

The Story of Abraham - . this story is told in the torah (the sacred text of judaism). abraham was originally from the

The Winnipeg General Strike - . by anna magura and sarah blackadar. why it began. the winnipeg general strike began on

Intro. To Christianity - . rooted in judaism. founded in 33 ce separated from judaism after destruction of second temple

Judaism - . beginnings…. the religion judaism unfolds beginning with the founding of the people by abraham. the journey

JUDAISM - . judaism overview. founder(s): traditionally, it is held that abraham and his descendants established judaism

Timeline - . 1 kings 6:1 temple began to be built 480 years after the exodus in the fourth year of solomon’s reign.