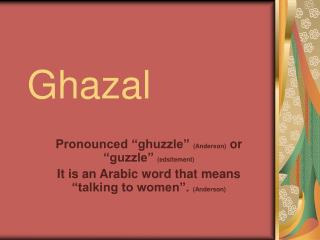 Ghazal. Pronounced “ghuzzle” (Anderson) or “guzzle” (edsitement) It is an Arabic word that means “talking to women”. (Anderson). History (Anderson). Developed in Persia in 10 th century. Currently practiced in Iran, Pakistan, and India Set to music and very popular in some countries Ghazal - . the style of poem that is going to be explained by christopher choi. the meaning. it means rhyming couplets

Ghazal - Apart from ghazal, urdu poetry has a range of poetic forms or

Ghazal, Matt, Diana - . what is social media? social media is the social interaction among people in which they create,

Qawwali Ghazal Free Download - Qawwali is an amazing genre of music, with lively rhythmic cycles, gripping melodies and a

University of Behr el Ghazal - . looking forward to the future by david

Ghazal Night @ Country Club Undri India - The latest of them all is ghazal night at country club undri, pune – a

Rumi, ghazal 598 Arberry 74 Barks 40 - Morn-arising friends, who is there that discovers the dawn, who discovers us

A campaign from ‘beginning to end’ Ghazal Vaghedi February 21, 2012 Toronto, Canada - . overview of running a