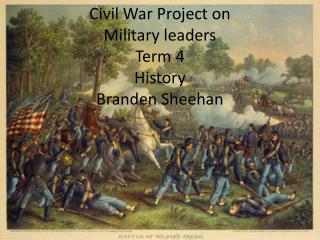 Civil War Project on Military leaders Term 4 History Branden Sheehan . U.S. Grant . Gen. Ulysses S. Grant argued with the President and aligned himself with the Radical Republicans. He was, as the symbol of Union victory during the Civil War, their logical candidate for President in 1868. Civil war Project - . battle of fort sumter by geno lynch. why is this battle even worth

Civil War Project - . by: katelyn kelly . when did the civil war

Political Leaders of the Civil War - . abraham lincoln. president of the united states during the civil war against

Military Technology of the Civil War - . modern war. railroad. a relatively “ new ” technology at the time north had

Chapter 4 Civil War - . standard 11.3 : you will analyze the role religion played in the founding of america, its lasting