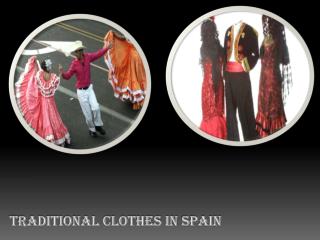 Traditional West Sumatran Clothes… - . by tiarne, laura and sophie . what is the traditional dress in west sumatra?.

The most important traditional clothes in the UAE - . fashions. men wears :. besht: a long dress worn over dishdasha and

Traditional Cut Clothes and Old Dhoti - If you are a manufacturer of clothes then this ppt is for you. we are the

The Traditional Custom Made Clothes of Hong Kong - Hong kong has gained popularity for its custom made clothing. the

Clothes in Russia - . it was believed that women’s hair hid some magic. it was a big sin if a married woman showed even

SPAIN IN AMERICA - . 1492. columbus discovers the americas for spain spain drives the moors o ut of their country.

Festivals In Spain - . questions and answers. what are the five biggest festivals in spain? describe them all and include

weddings in spain - Welcome to costa blanca events! we are a team of professional and experienced wedding planners who

CSP in Spain - . cayetano lópez ciemat director general december 2011. the elements of change in the energy