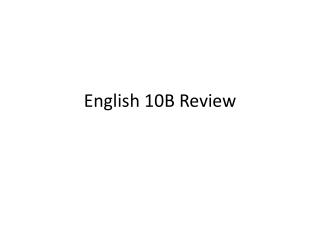 Turn-it-in Discussion Board - . english 10b 3 rd trimester. why are we doing this?. -to engage central themes from

CHAPTER 5 - . accounting and economic models of bank performance and valuation. learning objectives . to understand. the

Productivity - . energy flow through an ecosystem. energy enters the ecosystem as sunlight. only 1-2% of the light energy

GLYCOLYSIS AND ALTERNATIVES - . biot 309 fall 2013. glycolysis and alternatives. bacteria use 3 different pathways to

“The Story of an Hour” by Kate Chopin - . skills: annotation, close reading, writing a thesis. annotation. read the

English – ETC! Providing Excellence in English… and so much more! - . thank you for this opportunity to present to