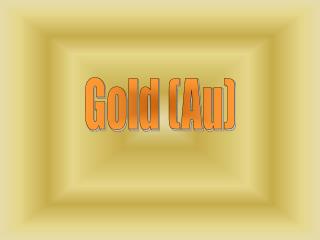 Gold (Au). The symbol for gold on the periodic table is ‘Au’. Gold. The discoverer of gold is unknown. Although it is believed to have been discovered around 3000BC. This precious metal has been highly sought after for many centuries. Gold has the appearance of Gold - . although silver (ag) is the best conductor, gold (au) is also a very good conductor &amp; has the advantage

Gold - . mickey manrique. g o l d  a u. gold get it,s name from the old anglo-saxton word for yellow, geolo . when you

Gold - . jt sampson. gold’s history. gold has been around since ancient times and there is no origin on its name. .