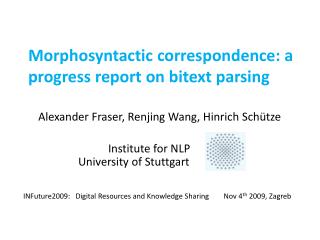 Business English Correspondence - . 外贸英语函电. lectured by xia yong. what are we going to learn today ?. unit

Dependency Parsing - . some slides are based on: ppt presentation on dependency parsing by prashanth mannem seven

Lexical Analysis - . why split it from parsing? simplifies design parsers with whitespace and comments are more awkward