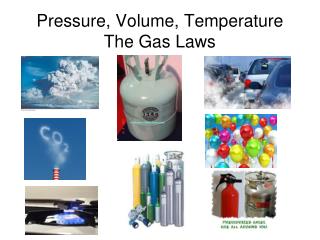 Pressure, Volume, Temperature The Gas Laws. Understand the qualitative relationship between pressure (P) and volume (V) and temperature (T) , when you have a gas Learn the three gas laws and how to apply then mathematically to solve problems Gas Temperature, Volume, and Pressure - . this tool can measure the temperature, volume, and pressure of a gas. what is

Charles’s Law – Gas Volume and Temperature - . a fixed amount of a gas at a fixed pressure will expand if the

The Gas Laws - . boyle, charles, combined , and ideal. kinetic theory. explains the states of matter in terms of

The Gas Laws - . describe how gases behave. can be predicted by the theory. amount of change can be calculated with

The Gas Laws - . a tutorial on the behavior of gases. kinetic molecular theory of gases. gases consist of small particles