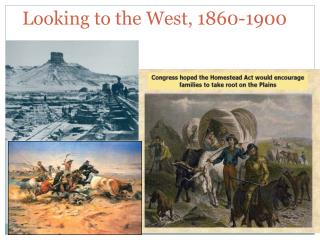 Looking to the West, 1860-1900. STANDARDS. g. Identify and evaluate the influences on the development of the American West h. Analyze significant events for Native American Indian tribes, and their responses to those events, in the late nineteenth century. THE AMERICAN WEST Stereotypes?.

THE OLD WEST - . 1860-1900. indian wars. following the civil war, the westward movement of settlers intensified in the

So you think you have it rough? - . a walk through saskatchewan’s history. following the south saskatchewan river