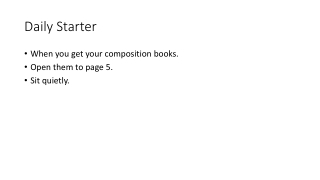 Daily Starter. When you get your composition books. Open them to page 5. Sit quietly. Earth’s Interior. What is geology? Geology is the study of the Earth, the materials of which it is made, the structure of those materials, and the processes acting upon them. What is a geologist?