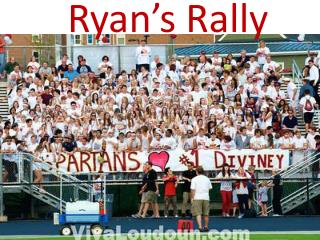 Ryan’s Rally. Ryan Diviney. Ryan Diviney, a WVU student, was attacked in November 2009 by  Austin Vantrease and Jonathan May (both of Newark, DE) . He has been in a coma-like state since. Each day is a struggle for him. Dakar rally 2016 - Highlights of the dakar

BASIC STRATEGIC LEADERSHIP SKILLS - . who is a leader? a person who has the capacity and will to rally men and women to a

AKC Rally Signs - . these are copies of the 2008 akc rally signs, as re-drawn by chuck shultz. use them to print your own

The AIDS Institute: Funding the Ryan White HIV/AIDS Program-Today and Beyond - . ryan white all grantees meeting