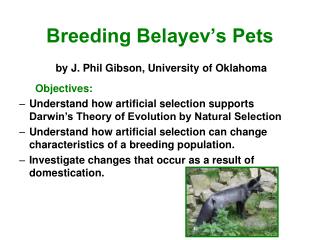 Health Benefits Of Having Pets - Are you thinking about getting a beautiful portrait of your pet? an artist by

Swine Breeding, Genetics and Reproduction - . dr. randy harp. the stress report. meat quality is the key to what we are

PLANT BREEDING TERMINOLOGY AND SYMBOLS - . plant breeders are a group of professional separated by a common language. it

Genetics - . genetics a. gregor mendel 1. 1 st study on heredity a. passing of characteristics from parents to

Ch 13 Genetics and Biotechnology - . sc.912.l.16.10. evaluate the impact of biotechnology on the individual, society

Selective Breeding - . to understand what selective breeding is, and how this is useful. tuesday, may 22, 2012. super