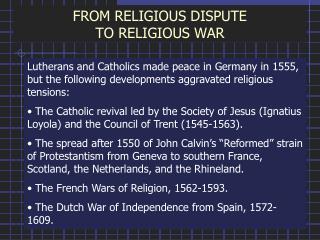 FROM RELIGIOUS DISPUTE TO RELIGIOUS WAR. Lutherans and Catholics made peace in Germany in 1555, but the following developments aggravated religious tensions: The Catholic revival led by the Society of Jesus (Ignatius Loyola) and the Council of Trent (1545-1563). Religious Establishment - . king george iii head of the church of england ruler of the american colonies. the bill of

Religious Discrimination - Which one of these is a religious belief protected by title vii? ... religious organizations

Religious Anthropology - . december 10, 2013. doctrine of illumination. the basic thrust of the holy spirit’s

Religious Language - . speaking about god part 1. why religious language? . the concept of a god is: something other

Religious Figures - . reach for the top evan sauve. abraham. i am thought to have been born around 2100 bc, in the city

Religious Awakening - . chapter 4, section 1. second great awakening. the revival of religious feeling in the u.s. during

Religious Studies - . aims of christian ethics:. to nurture children in the christian faith to study information about

Religious Specialists - . small-scale societies: these men/women usually have other roles/jobs within the society. their

Religious Diversity - Unitarian humor. what do you get when you cross a uu with a jehovah's witness?someone who knocks on

Religious Reformation - . miss isler trimester 1. the condition of the church. 1400-1517 signs of disorder signs of

Religious Language - . your a2 topic has two aspects:. verification and falsification. some philosophers (particularly