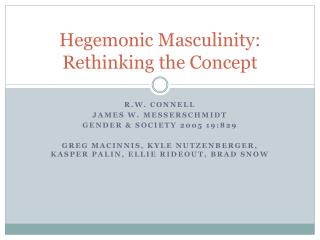 Men and Masculinity - . male friendship and other social relationships. what men desire. men have the desire to be with

femininity and masculinity - . an overview. how different are women and men?. males and females - ‘opposite

Rethinking - Serving the customer". moving from customer service" to . leadership is not so much about

Violence and masculinity - . the most astonishing aspect of ploughing through masses of literature on atrocities of all

Rethinking the use of Concept maps - . mariya burdina university of central oklahoma . how can i get to the library? .

Performance of Masculinity - . roxanne lo cmc 400 spring april 12, 2012. i still need to transcribe the interviews from

Hegemonic Masculinity - Immediate, likely and meaningful: a framework for understanding and responding to the sexual

Rethinking the Service - . phil ford gina card. what we were. the blooming days. schedule service was 60 stops: a

Rethinking Punctuation - . focus on clauses. the principle function of the comma is to demarcate (separate) clauses.

Masculinity in the Media - . media’s view on “what a man is”. men in ads . males, when depicted in ads alone,

Rethinking the American Child - . there are three basic tasks of the adolescence journey who am i? identity do i and my