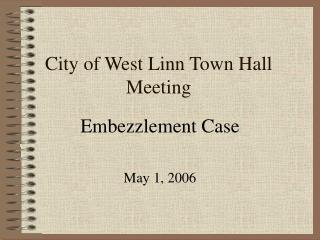 City of West Linn Town Hall Meeting. Embezzlement Case May 1, 2006. Disclaimers. Elma Magkamit has the right to a fair trial and we need to make sure we do nothing that infringes on that right or possibly damages the DA’s case City of Leon Valley Town Hall Meeting - . background. since 1972, when the original city hall was built, the city of leon