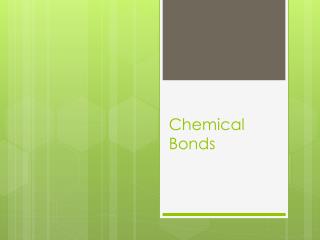 Chemical Bonds. 6-1 Ionic Bonding. When is an atom unlikely to react? What is one way in which elements can achieve stable electron configurations? How does the structure of an ionic compound affect its properties?. Stable Electron Configurations. Chemical Bonds - . atoms gain or lose electrons through chemical reactions to gain a filled outer shell and therefore a

Chemical Bonds - . an electrical attraction between two oppositely charged atoms or groups of atoms. happens when an atom

Chemical Bonds - . the interaction between 2 atoms may result in the formation of a chemical bond whereby 2 atoms are

Chemical Bonds: - The attractive (intramolecular) forces, ie.“ the glue” , strong enough to maintain a group of

Chemical Bonds - . ionic bond bond formed between two ions by the transfer of electrons. ionic bond. between atoms of