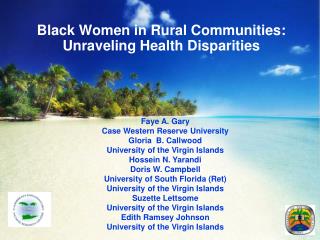 Women with Disabilities as a Health Disparities Population - . margaret a. nosek, phd executive director center for

The Emergence of Free Black Communities - . 5.3. free black communities. a fter the revolutionary war in the north and

Health Disparities in cancer screening and prevention - . a novel approach to community outreach to at risk communities.

Cardiovascular Disease in Women: Demographics, Statistics and Health Disparities - . cvd and other major causes of death

2014 Rural Hospital Conference - . the cost of doing nothing is too high. so, how do we partner to influence the health