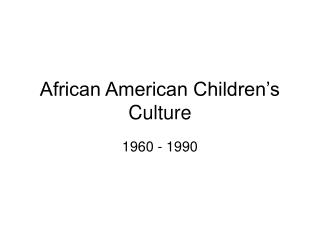 Jim Crow and Civil Rights - . the african american experience. guiding questions:. what difference did the rise of jim

AMERICAN CULTURE 101 - This is a undergraduate student built powerpoint on american culture 101 assignment. i thought it

Finding Your African American Ancestors - . by jerry merritt october 15, 2011. objectives. suggest resources to get you

Roaring Twenties “Roaring 20’s” – - . when there was widespread prosperity. . new form of music from african

Sub-Groups of American History - . leaders of our past for key groups throughout american history. puritans valued

Conquering the Achievement Gap: The Promise of African American Males - . a summit sponsored by the michigan department