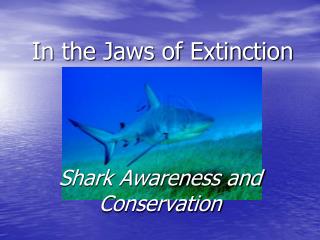 In the Jaws of Extinction. Shark Awareness and Conservation. What is a Shark?. Shark is thought to have evolved from a Middle English Term, shurke (villain) First sharks lived about 380 million years ago Considered “primitive” because they have changed very little in that time. Tumors of the jaws

LESIONS OF THE JAWS - . m.l. chindia school of dental sciences university of nairobi. presentation objectives:. to

Tumours of the Jaws - Malignant tumors. tumor:is a mass of cells, tissues or organs resembling those normally present but

THE  JAWS  EFFECT - . the  jaws  effect. this impacts you!. acknowledgements. i would like to thank my mentor mark

JAWS - Use the class wiki http://hawickhighschool.wikispaces.com/access+3 to help you complete this powerpoint. put as

The extinction of dinosaurs

SYSTEMIC DISEASES OF THE JAWS - . dr samy i al-agha a.professor of radiology. radiographic features. 1. a change in size

SYSTEMIC DISEASES OF THE JAWS

Extinction of the Dinosaurs - . by chris keach. the kt-extinction

the extinction of dinosaurs - . they reigned over the earth for more than 100 million years and suddenly, mysteriously

Alligator Jaws - . create a flash video that uses the hinge principal to create 3 alligators that have top jaw