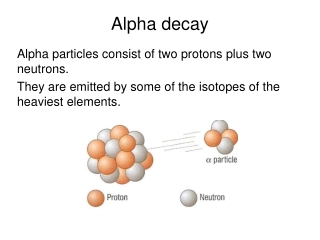 Alpha Decay - . because the binding energy of the alpha particle is so large (28.3 mev), it is often energetically

Review: Alpha Decay - . a nucleus emits an alpha particle ionizing to particles around it – extremely hazardous if

Alpha Decay Rates in Metals at Kelvin and Millikelvin Temperatures - The case of the disappearing alpha activity.