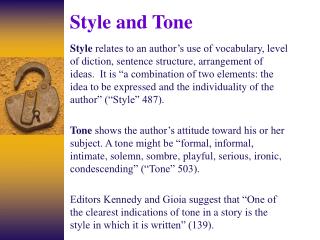 Style and Tone. Style relates to an author’s use of vocabulary, level of diction, sentence structure, arrangement of ideas. It is “a combination of two elements: the idea to be expressed and the individuality of the author” (“Style” 487). The Structure, Format, Content, and Style of a Journal-Style Scientific Paper - . chia-hsiang chen. why a scientific

Mood and Tone in Literature - . introduction. unit essential question. how do mood and tone contribute to the effect of a

Accel. - Accel. gradually speed up. the practice if improvising alternating 4-measure solos between an instrumental

Art Nouveau - . what is art nouveau? when was the style fashionable? give dates to and from) what shapes and forms make

APA Formatting and Style Guide - . what is apa?. the american psychological association (apa) citation style is the most

CSS: Cascading Style Sheets - . what are style sheets. a style sheet is a mechanism that allows to specify how html (/