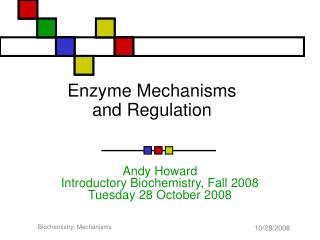 Enzyme Mechanisms and Regulation. Andy Howard Introductory Biochemistry, Fall 2008 Tuesday 28 October 2008. How do enzymes reduce activation energies?. We can illustrate mechanistic principles by looking at specific examples; we can also recognize enyzme regulation when we see it. Regulation Enzyme Regulation - . c483 spring 2013. questions. 1. which statement is false about allosteric regulation? a) it is

Enzyme Regulation - . what you need to know. understand the different ways that enzyme activity is regulated. what

Mechanisms of enzyme inhibition - . competitive inhibition: the inhibitor (i) binds only to the active

Mechanisms of Enzyme Action - . what you need to know. understand the importance of and need for enzymes in biological

Study of Enzyme Mechanisms - . we have studied the mechanisms of peptide bond formation &amp; hydrolysis by an enzyme

Regulation of Enzyme Activity - . enzyme activity must be regulated so that the proper levels of products are produced at

Chapter 15 Enzyme Regulation - . outline. what factors influence enzymatic activity? what are the general features of