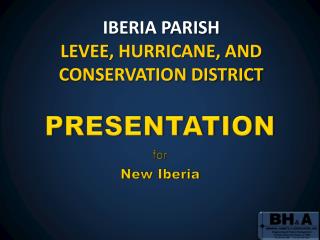 Hurricane Katrina and the levee failures (Aug. 29, 2005) - Post-katrina supportive-housing initiatives: bringing the most

Conservation District Supervisor Accreditation - . module 11: building legislative relationships. what you will learn in

Iberia Group - . january 2014. index. who we are our fleet our destinations our business t4, our hub products and

Conservation District Annual Audit - . module x. what you will learn in this module. what is an audit? why have an audit?

committed to our coast - Senate concurrent resolution 39 of the 2013 regular legislative session – phase i study.