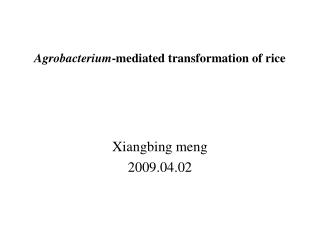 Agrobacterium tumefaciens - . unusual disease agent brought into use as plant genetic engineer. a range of interactions

Transformation of mesenchymal stem cells by the retrovirus-mediated gene transfer - . 1 department of drthopaedeic

Agrobacterium intro and plan - . intro. this slide deck is the result of my conversations with chris and our discussions

History of Rice - . feeds more than half the world's population. intertwined with slavery. ancient plant . women

RICE-CREAM ½ bowl of rice Bowl of ice cream - Steps first, you pour the rice into the ice-cream. then, stir the

Agrobacterium tumefaciens (“AT” for short) - . by: jack foarde &amp; lauren netz. what is agrobacterium