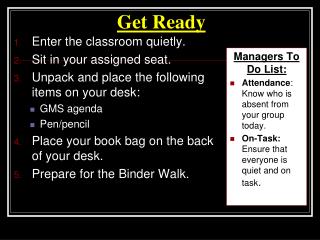 Get Ready. Enter the classroom quietly. Sit in your assigned seat. Unpack and place the following items on your desk: GMS agenda Pen/pencil Place your book bag on the back of your desk. Prepare for the Binder Walk. Managers To Do List: Get Ready… - . you need: a file folder – write your first and last name on the tab with your class period pen or

Get Ready…. - Get ready…. values - attitudes and beliefs that drive actions vision - preferred future that is desired

Get Ready. - Get ready. test. your. romanesque. knowledge!. a. b. side aisles. radiating chapels. c. d. nave. transcept.

Get Ready… - . turn in your reading log to the box buy a yearbook!!! there are 459 students that appear in the

Get Ready! - . which of the following describes the policy adopted during the 1820s and 1830s as a permanent solution to

Get Ready! - . a guide for referring agencies. november 2011. what is get ready!?. what we do. business action on

Get Ready… - . you will need: y our springboard book y our cinematic t echniques tree charts y our thesis statement be

Get ready! - . quiz on obj # 1-9 compare objectives with your neighbor and add new learnings in a different color. help

Get Ready - . get set. start the clock. household electricity card game. question 1. this is where you connect the earth

GET READY - . lisa is 9 years old and has lived in more apartments, backrooms and homeless shelters than her age. santa

GET READY: - . what do the items below all have in common?. (think in terms of what you shouldn’t do with them).

Get Ready… - . study for the drama terms and act i quiz! i will give you the first 5 – 7 minutes of class. you will