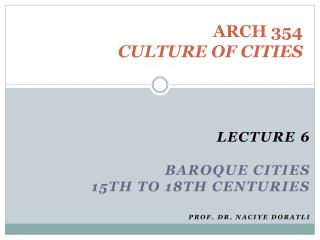 ARCH 354 CULTURE OF CITIES. LECTURE 6 Baroque Cities 15th to 18th Centuries Prof. Dr. Naciye Doratl I. BACKGROUND. The monastery, the guild and the church served as formative elements of the medieval town . ARCH 354 CULTURE OF CITIES - . lecture 8 postmodern cities: cities in the third millennium from metropolis to megalopolis

ARCH 354 CULTURE OF CITIES - . lecture 1 what is the city? what is culture? why study the history of the city naciye

Growth of Cities and American Culture - . excerpt from c. richmond’s “industrialization” ppt – posted to her

Changes in Cities and Culture - . chapter 10, sections 2 &amp; 3. america becomes a nation of cities. what term was

Arch of Constantine - . north side facing towards the city. south side outward facing. possible reasons for recycling

Arch of Titus - So far we have studied: portraiture patrician carrying busts philip the arabian commodus now this is:

Arch of Titus - . by joe bennett. info. located on the highest point of the via sacra. built by titus’ brother domitian

ARCH OF CONSTANTINE - . this arch was built by senate decree to commemorate constantine’s victory over maxentius in

arch - . presentation made by : karelia diaz vanessa quintero. contents. what is an arch? arch through the ages how is it