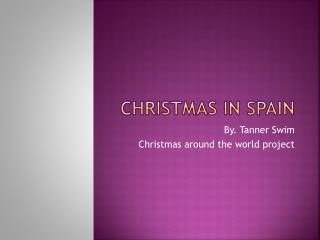 Christmas in Spain. By. Tanner Swim Christmas around the world project . M aps and flags of S pain. The map of Spain The flag of Spain. http://www.northpole.net/world.htm. Population. The population of Spain is about 47 190 493. On November 7, 2011. . CHRISTMAS IN SPAIN - . the weather at cristmas. here in spain, at christmas the weather is very cold, but it doesn´t

Christmas in Spain - . december 8th  – this is the public holiday of immaculada which marks the beginning of the

Christmas in - . and. england. poland. what is christmas?. christmas is a time of joy for the birth of jesus christ. it

Christmas in - . created by dee  2010. dutch children in holland, or the netherlands, anxiously look forward to st.

SPAIN IN AMERICA - . 1492. columbus discovers the americas for spain spain drives the moors o ut of their country.

Festivals In Spain - . questions and answers. what are the five biggest festivals in spain? describe them all and include

weddings in spain - Welcome to costa blanca events! we are a team of professional and experienced wedding planners who

CSP in Spain - . cayetano lópez ciemat director general december 2011. the elements of change in the energy