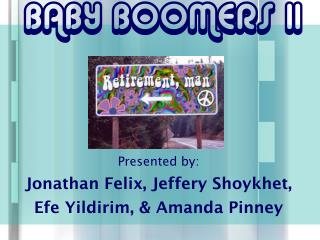 Marketing to the Baby Boomers - . why are we here today? . do you know who the fastest growing demographic is? who

Marketing to the Baby Boomers

From Baby Boomers to Millennials - . how to remain hipaa compliant in the age of social media. molly staley, marketing

Baby Boomers, Xers, Yers and Me - . using accuplacer and clep to span the generations. open forum and discussion. issues

HOW TO WORK FOR BABY BOOMERS - . j. david mcmahon ’69 associate director texas a&amp;m career center. do you have