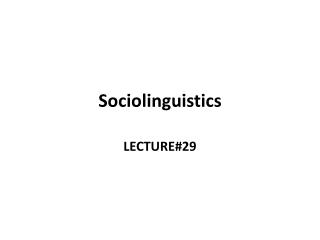 Sociolinguistics. LECTURE#29. Sociolinguistics. In an article on the varieties of speech he found among the 1,700 or so speakers of Menomini , an Amerindian language of Wisconsin, Bloomfield (1927) mentioned a variety of skills that were displayed among some of the speakers he knew best:

The Introduction - Lecture 1. the introduction. iwanfauzi09@yahoo.com. what is sociolinguistics? it is aspects of

SIDE BY SIDE - Encouragin g biliteracy in florida’s schools. matthew barbee university of hawaii sls 660:

Sociolinguistics 7 - . acts of identity. the story so far. we classify people in terms of general ‘person-types’ e.g.

Sociolinguistics 5 - . power and solidarity. the story so far. we classify ourselves and others. how we classify someone