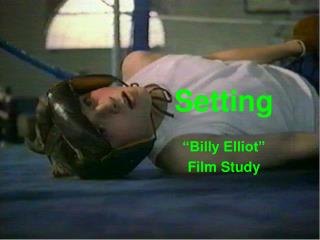 Setting. “Billy Elliot” Film Study. Setting. Time: When? Place: Where? Atmosphere/Context: What?. Signifiers. A signifier is any item that signals (reflects) time, place or even character. Lots of Signifiers = Mise en Scène. Setting - . the power of

Setting - . time and place. what is the setting?. the setting of a story is the place where the story happens and the

setting - . . setting. what is the setting ?. where and when the story takes place. example. in ¨leo the late bloomer ¨

Setting - . children of men. the contrasts of different setting in this film: jasper’s house, secluded and hidden

setting - . where and when a story takes place. plot. the events that happen in a story. answers --who , what,

SETTING - . setting : means the time and place. place: billy elliot is set in everington , a mining village in county

Setting - . october 8, 2012 come in and clear desks, sharpen pencils, read silently 1 st block only. warm up: look at the

Setting - . maycomb county, alabama based on lee’s hometown of monroeville set in the years of the great depression

Setting - . setting. there are two major settings—the world of the narrator and the ‘story world’ or diegetic world

Setting - . as mood &amp; symbol. mood = atmosphere. versatile writer’s technique “…when we speak of the of the

Setting - . time. 1930s during the great depression happened as a result of climate change causing “dust bowl” of

Setting - . by- audryanna carder . definition . the place or time when a story takes place. time is when it is happening