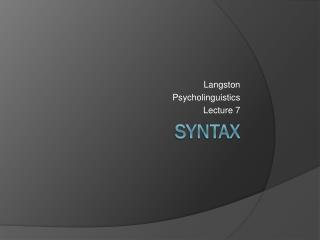 Langston Psycholinguistics Lecture 7. Syntax. Grammars. Grammar: A set of elements. Rules for combining those elements. Where have we seen grammars? Speech perception. Reading. Word formation. Now for sentences…. Grammars. Ambiguity: How to deal with it?