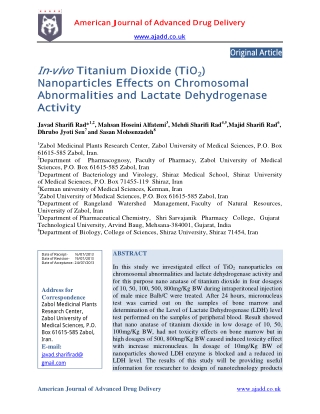 In this study we investigated effect of TiO2 nanoparticles on chromosomal abnormalities and lactate dehydrogenase activity and for this purpose nano anatase of titanium dioxide in four dosages of 10, 50, 100, 500, 800mg/Kg BW during intraperitoneal injection of male mice Balb/C were treated. After 24 hours, micronucleus test was carried out on the samples of bone marrow and determination of the Level of Lactate Dehydrogenase (LDH) level test performed on the samples of peripheral blood. Result showed that nano anatase of titanium dioxide in low dosage of 10, 50, 100mg/Kg BW, had not toxicity effects on bone marrow but in high dosages of 500, 800mg/Kg BW caused induced toxicity effect with increase micronucleus. In dosage of 10mg/Kg BW of nanoparticles showed LDH enzyme is blocked and a reduced in LDH level. What are the Best Uses of Nano Photocatalytic Titanium Dioxide? - The nano photocatalytic titanium dioxide is the most