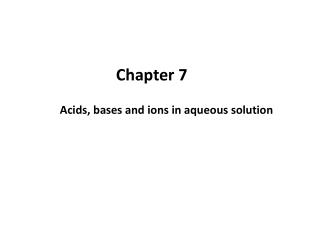 Reactions in Aqueous Solution I: Acids, Bases, and Salts - . chapter 10. properties of acidic solutions. they have a sour

Chapter 14 - Aqueous Equilibria: Acids Bases - Acid-base concepts. acids and bases are all around us. they make up one of

Acids and Bases - . properties of acids. they are corrosive ph range is 0 to 7, lower the ph, more acidic the acid taste

Acids and Bases - . adapted from: