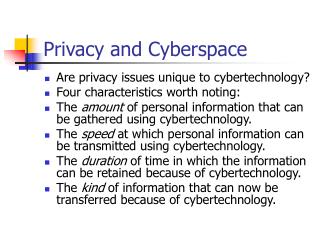 Ethics and Privacy in Cyberspace - Lesson 22 privacy and other personal rights thomas j. watson, chairman of the board

SOVEREIGNTY IN CYBERSPACE - A discussion of how international, federal, and state relations have been impacted.