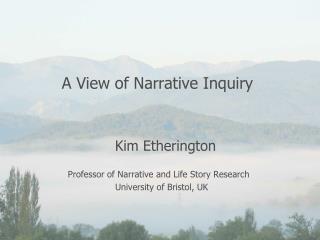 A View of Narrative Inquiry. Kim Etherington Professor of Narrative and Life Story Research University of Bristol, UK. Abstract. This presentation offers a view of narrative inquiry based upon social constructionist, constructivist and feminist ideas and practices. Narrative Therapy - . www.person2person.net.au/counselling.html. origin of narrative therapy. emerged in the 1970s and

What Are Jets? - . the experimentalist’s view (…my view) a bunch of particles generated by hadronization of a common

Writing Imaginative Narratives - . standard 1.1: select a focus, an organizational structure, point of view based upon

The Utilitarian Point of View - . copyright 2005 makoto suzuki caution: some materials are adapted from prof. donald

Mary Rowlandson &amp; The Captivity narrative - . born circa 1637 in england.  her parents john and joan white were

My mousetrap car Inquiry Project - . by jocelyn wells. starting questions. what should i use for wheels and axles? how