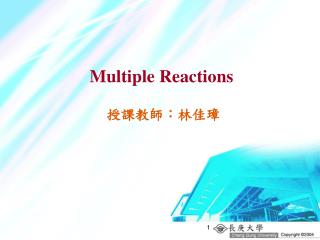 Multiple Reactions. 授課教師：林佳璋. Definitions. There are four basic type of multiple reactions: series, parallel, complex, and independent. These types of multiple reactions can occur by themselves, in pair, or all together. When there is a combination of parallel and series reactions, they Reactions - . reactions. represents information about a reaction that is independent of enzymes that catalyze the

Reactions - . part 2: net ionic equations. homework review. #1 which of the following will dissociate in water?. agno 3

Reactions of Alkenes: Addition Reactions - . addition reactions. addition is the opposite of elimination. here are some

Reactions of Alkenes: Addition Reactions - Hydrogenation of alkenes – addition of h-h (h 2 ) must be catalyzed by

Chemical Reactions I. Reactions and Equations A. Chemical reactions - 1. atoms of one or more substances are