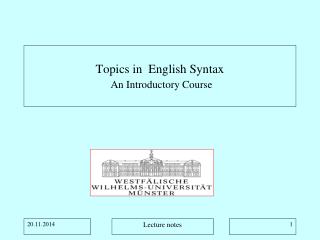 English Syntax - . 1 st meeting. english syntax concept. according to. syntax and other linguistics branch of study.

American Military English Course Topics in Counterinsurgency - . . this presentation is for information only. no us

Teaching an Introductory Course in Data Mining - . designed for university instructors teaching in information science or