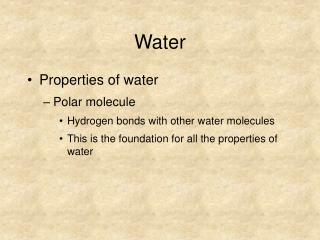 Water. Properties of water Polar molecule Hydrogen bonds with other water molecules This is the foundation for all the properties of water. Water. Water is the solvent , the medium and the participant in most of the chemical reactions occurring in the environment.