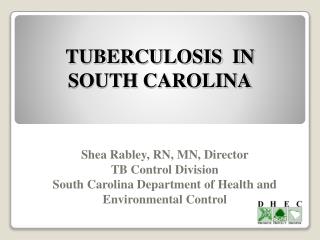 Self-Study Modules on Tuberculosis - . 5. infectiousness and infection control. module 5: objectives. at completion of

The 6 Childhood Killer Diseases - . part 1 tuberculosis. today’s objectives. after this lesson you will be able to

The American Revolution - . kings mountain and cowpens as microcosm. the plan . dis -spell many myths of the war tactics,

South Carolina in the Early 1700s - . 1729 king george i accepted the request to make sc a royal colony. the thirteen

drug resistant tuberculosis - Tuberculosis is a global health problem and concern to every human, effective control

JOURNALISM LEADS - . how to write amazing leads. their purpose. a “lead” or “lede” grabs the reader’s