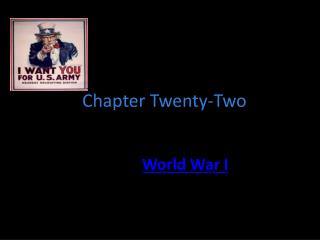 Chapter Twenty-Two. World War I. Section 1. American Communities. Vigilante Justice in Bisbee, Arizona. The radical Industrial Workers of the World (“Wobblies”) organized a peaceful strike that won support from over half the town’s miners in 1917 Chapter Twenty-Two - . cats. alat presentations study tips. if viewing this in powerpoint, use the icon to run the show

Chapter Twenty-Two - . introduction. while the economy can and does move away from long-run equilibrium, it has a natural