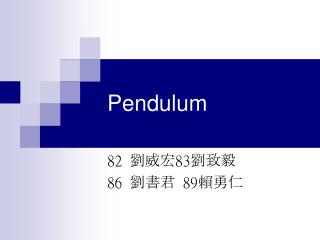 Pendulum. 82 劉威宏 83 劉致毅 86 劉書君 89 賴勇仁 . Pendulum. A gravity pendulum is a weight on the end of a rigid or flexible line or rod, which, when given some initial lift from the vertical position, will swing back and forth under the influence of gravity over its central (lowest) point. Inventions of the Renaissance - Take notes as you view the slides. clocks the oldest surviving mechanical clock were

Energy - . bellringer. write your name on a piece of loose leaf paper. take out your lab from last year pendulum pun.

Lecture 6: 555 Timer - . energy storage, periodic waveforms, and one of the most useful electronic devices. examples of

Who wants to deal with… - . the father of horror?. who wrote the pit and the pendulum and the raven ?. benjamin

“THE PIT and THE PENDULUM” - . by edgar allan poe. i can build background knowledge necessary for understanding

Lecture 24. Assorted Topics - . (we are sneaking up on control). dc motors and their behavior: a state space example. the

MERCANTILISM - . the swing of the pendulum from the “heavenly” incentive of the scholastics to the “mundane”

Lecture 12. Stability, the Phase Plane, and a Taste of State Space - . we’ve been working with second order equations