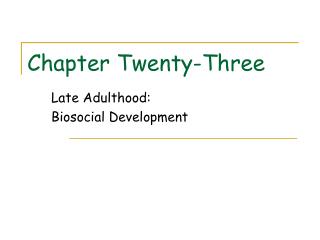 Chapter Twenty-Three. Late Adulthood: Biosocial Development. Prejudices about late adulthood are held by people of all ages, including children and the very old. Prejudice and Predictions. Ageism. Ageism —a term that refers to prejudice against older people because of their age Chapter Twenty-One - . rabbits. alat presentations study tips. if viewing this in powerpoint, use the icon to run the

Chapter Twenty - . understanding the strategies and communications of the job search. overview of the job hunt.

Chapter Twenty-One. Claims - . after reading this chapter, you will be able to: describe the procedures and forms used in