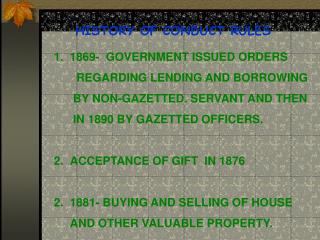 HISTORY OF CONDUCT RULES. 1869- GOVERNMENT ISSUED ORDERS REGARDING LENDING AND BORROWING BY NON-GAZETTED. SERVANT AND THEN IN 1890 BY GAZETTED OFFICERS. ACCEPTANCE OF GIFT IN 1876 1881- BUYING AND SELLING OF HOUSE AND OTHER VALUABLE PROPERTY. RULES OF CONDUCT - . you may follow the meeting online – www.marshallmn.com and link to paperless council meeting.

HISTORY TIMELINE Rules - . write this on the back blank page of your timeline. put your name on your timeline your

Rules of Thumb for Business Conduct Across Cultures - What is culture?. culture is the sum total of beliefs, rules,

RULES OF CONDUCT IN THE NATIONAL PARKS OF CROATIA - . where are the plitvica lakes. rules of conduct in our national