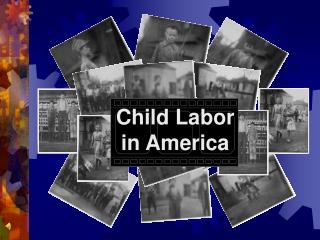 Child Labor in America. Child Labor: the Lucky Ones. Child labor was a national disgrace during the Gilded Age. The lucky kids swept the trash and filth from city streets or stood for hours on street corners selling newspapers. Child Labor: the Less Fortunate. Child Labor - . pakistan a young girl carries a load of wool down a street in a poor section of peshawar. pakistan has

THE EFFECTS OF GLOBALIZATION ON POVERTY AND CHILD LABOR - . alicia menendez the university of chicago june 23, 2009.

Child Labor - . the coal workers greasers : little boys who were responsible for greasing the wheels of the mining

Child Labor in America - Building a great nation on the backs of its youth. child labor in america. when is child labor

Child Labor - . by: sam mcdonald. introduction- what is child labor?. the dictionary defines child labor as the

Child Labor - Warm-up: please make a list of all the problems you see at seneca and then describe how you would fix the

Child Labor in the Democratic Republic of the Congo - . by grace, nick, lucy, connor. the democratic of the congo. child

Child Labor- US History - . history. all photos are by lewis hine goal expose the conditions of child labor to bring

Child labor in pakistan - . by: kyndal mckinney &amp; vivian chen. only the beginning. in between this area child

History of Child Labor in the US - . elizabeth mcdonald. objective. the student will analyze how the fight for child