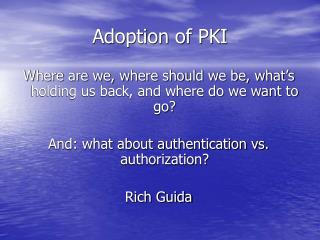 Adoption of PKI. Where are we, where should we be, what’s holding us back, and where do we want to go? And: what about authentication vs. authorization? Rich Guida. What are the framing issues?. What applications need authentication, e-signatures, or confidentiality?

PKI - . notes. if have a dell see use about a cdrom to install debian. have try computers as soon as possible. both

Adoption Of I.T.I. - Adoption of i.t.i. iti can be adopted by industries in two ways. partial adoption :