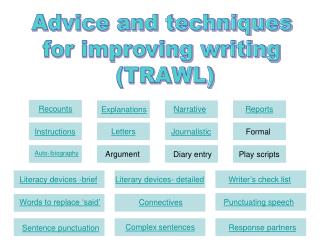 Chapter 3 Improving Writing Techniques - . by: kristin kozlovsky. researching. importance what your research should

Writing Advice - . after the josie the ar cheat prompt. don’t imply…don’t assume. be direct, be

Writing Techniques - . presented by: rit academic support center. thought-provoking questions. how many of these

Suggestions, Techniques And Advice For Utilizing Cell Phones - Mobile phones 101: recommendations that you have to

Tips for Improving Your Writing - . signature school august 2004. use active voice instead of passive. active: john

Improving Efficiency - Tips and Techniques - . kevin stever february, 2010. where does the time go?. how do you keep