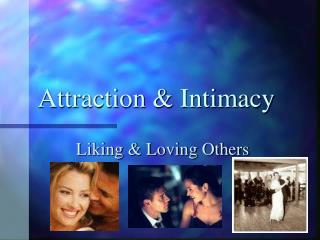 Attraction & Intimacy. Liking & Loving Others. I. We need to belong or connect with others in enduring, close relationships. . Why??? **Promotes survival (more hands to help build shelter)

Lecture 2 - . shielding and effective nuclear charge z* in polyelectronic atoms, each electron feels the attraction of

Chapter 6 Intermolecular Forces of Attractions Between Particles - . intramolecular forces is the force of attraction

Homework - . turner prize – what did you think ? did you find any themes in the artist’s work? what is a theme? ideas

Attraction and Intimacy: Liking and Loving Others - . chapter 11 david myers. attraction and intimacy. what leads to

Attraction to Minors: - . myths and facts prepared by richard kramer. living in truth and dignity. how many people are

Chemical Bonding - . what is a bond?. force that holds atoms together results from the simultaneous attraction of

Chemical Bonding - . what is a bond?. force that holds atoms together results from the simultaneous attraction of